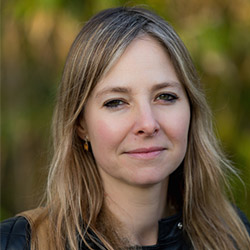 Alice is an anatomist, author and broadcaster. She’s Professor of Public Engagement at the University of Birmingham, where she enjoys teaching medical students’ embryology and anatomy, and sharing her subject with the wider public, as well as helping other academics with their outreach.

Alice studied medicine originally, before becoming a university lecturer and focusing on anatomy and biological anthropology. Her research on archaeological human bones led to the beginning of a career as a broadcaster, starting with Time Team on Channel 4, before going on to present her own big budget, landmark series about human evolution on BBC Two, including The Incredible Human Journey and Origins of Us. She has presented the BBC archaeology series Digging for Britain for ten years, and she has made three series of Britain’s Most Historic Towns for Channel 4.

In her spare time, she’s written ten popular science books, including her latest - a book about prehistoric migrations, Human Journey, for children. Alice is passionate about education in all its forms and at all levels.

Our work to improve the lives of the children and families of Nepal is made possible by the amazing support that we receive from our donors & funders. We do not receive any core government funding & rely on the generosity of our supporters.